The 2000 Covington Buccaneers dedicated their season to the memory of their friend and teammate, John Starry.

The 2000 season can be described in two words…John Starry. Whenever anyone thinks of the 2000 team they will think of John and that’s the way his teammates want it.

The entire season was for John. They used their success on the field to remind people of John and the result was a lasting memory of Number 65.

Coming off of a playoff appearance the year before, hopes were high because many of the players were returning for another year. Seniors like Marc Hitt, Andy Hitt, Mike Cope, Bubby Bubeck, Jeremy Robinson, Dan Burgess, Josh Reck and Doug Apple were predicted to lead the Buccs to another playoff appearance.

High expectations and football fever suddenly seemed meaningless on August 26, 2000 as word of the loss of John Starry circulated around town. Suddenly football became a source for healing and the 2000 Buccaneers developed a bond with the community that will live forever.

The season opened on August 25th, just hours after Starry’s accident. The Buccs destroyed Miami East 49-7, but all thoughts were on their teammate as he clung to life in the hospital. Starry passed away a few days later, leaving the Buccaneer family in a state of shock.

National Trail was next of the schedule and the entire Buccaneer team made a pact that evening. Prior to the game a single balloon was released from midfield toward the sky in tribute of John.

The Buccs then crushed the visiting Blazers 45-0. After each score, the tears behind the face masks were obvious as they pointed to the sky to honor John.

The Buccs went through the remainder regular season crushing every opponent in their path and every step of the way they made a tribute to number 65.

For every score there was a salute to the sky.

For every interview with the press there was a mention of his name.

For every player there was a sticker of number 65 on each helmet.

And, for every game there was a number 65 jersey on the back of their bench.

“Number 65 will never be issued as long as I’m the coach around here!” said Coach Peacock, holding back tears at the awards banquet.

That’s a fitting tribute to a kid who has touched so many people’s lives; even those who never knew him.

The most fitting tribute to John Starry, however, came on “Parent’s Night”. The entire Buccaneer team escorted John Starry’s parents across midfield to a standing ovation.

As Mrs. Starry put it, “I consider those boys my kids now.”

John is probably thrilled to have 34 brothers. 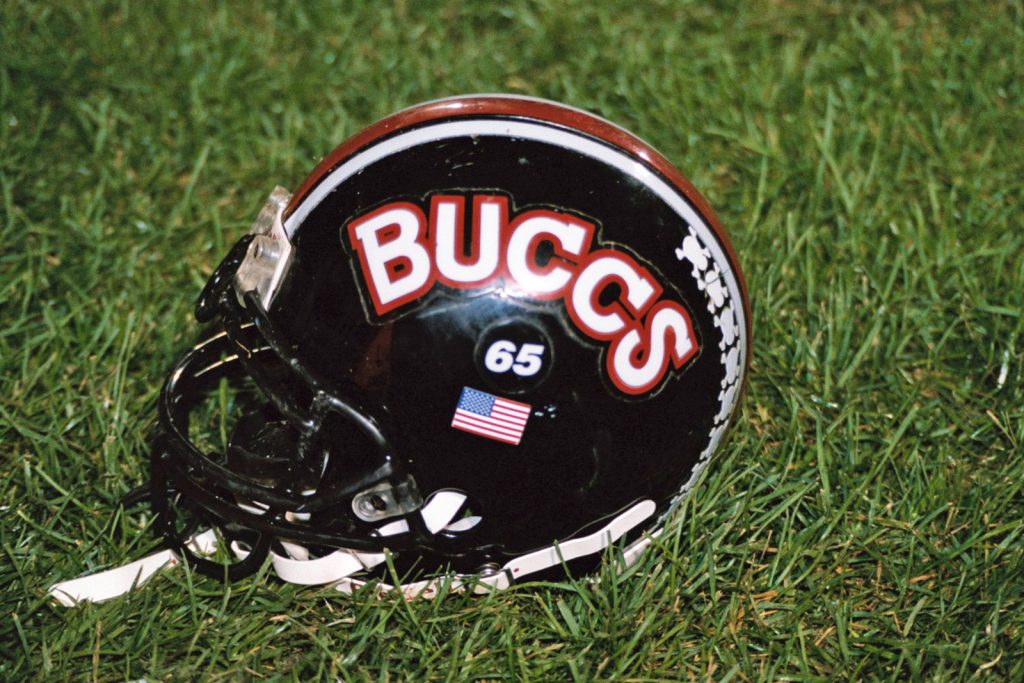 The Buccaneers season began in early September with tragedy. Their friend and teammate was critically injured in an automobile accident before the season opener against Miami East. A week later, before their game against National Trail, John Starry passed away. The team dedicated the season to the memory of their teammate.

Sure, the Buccs had a great year in football terms. The year they had honoring their teammate was much more important. It goes beyond making plays, wins and losses. It’s the way they conducted themselves on and off the field that was the true measure of their season dedication.

How can anybody forget the balloons they let float over the field with #65 on them?

How can anybody forget seeing Johns #65 jersey and helmet on the back of their bench facing the crowd?

How can anybody forget the emotional moment when the entire team escorted John’s parents at Parent’s Night?

This year’s team left a lasting memory of #65 in the minds of Bucc fans. They used their stage to keep alive the memory of their teammate.