The 1952 Covington Buccaneers finished with a perfect 9-0 record, the first perfect season in school history. 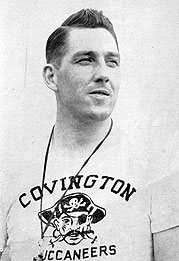 It is only fitting to mention, in this Covington football history, the spectacular feats of the 1952 Buccaneers, the team that became known as “The Thundering Herd”.

This squad netted Covington High School its first unbeaten and untied football season by amassing 337 points while holding nine opponents to a total of 45. The backfield, composed of Leonard Wood, Kenny Shefbuch, Doug Diltz, Bob Tobias, and Doug Alexander, generated a ground attack that rolled to a net gain of 3,456 yards rushing while the rugged defensive unit held their opposition to 687 yards gained. The flashy backfield cavorted behind a “rock-bound” forward wall consisting of Ronnie Finfrock, Don Zimmerman, Dick Via, Bob Johnston, Jim Minnich, Bill Frey, Herb Wackler and Don Martin, who were rightly dubbed the “push ’em back boys” as they constantly shoved their opponents into the shadows of their own goal posts.

On October 22, “The Thundering Herd” was rated by the United Press as the second best Class B team in the State of Ohio, a rating they retained throughout the remainder of the season. 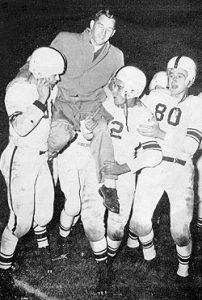 THE TRI-COUNTY CHAMPS were guided through their successful season by Coach Paul Devine, a product of Marysville, Ohio. Graduating from Marysville High School in 1942, Paul enrolled at Heidelburg University, but after one semester, was called to duty with the U.S. Army, where he served from 1943 to 1946. His tour of duty with the U.S. Rangers took him to England, France, Belgium and Germany, although part of his military career was spent at Georgetown University where he was a member of the football team in 1943. While attending Marysville High School, Paul was a member of two state tournament basketball teams, 1941-1942; and named on the All-Central District squads those two years.

After being discharged from the Armed Forces in 1946, “Mr. Football” returned to Heidelburg College, from where he graduated in 1949. While at Heidelburg, his halfback abilities earned him a berth on the All-Ohio teams of 1946-47-48; All-Ohio Conference 1946-47-48; All-Midwest in 1947; and led to Devine being drafted in the 17th round (163 overall pick) by the professional Green Bay Packers in 1949. Unfortunately, a knee injury forced his retirement from professional athletics and in 1950 Paul came to Covington to coach the Buccaneers. Since that time, football under the Devine Dynasty was accounted for 22 victories, two ties and three defeats.

Note: It has been published that Paul Devine played 9 games for the Green Bay Packers in 1949. However, although he was drafted by the Packers, the organization has no record of Devine actually competing in an NFL regular season contest as a member of the Green Bay Packers.

1952 Season…The 1952 Covington Buccaneers, known as “The Thundering Herd” were the first team in school history to have a perfect season. Coached by Paul Devine, they won all nine games they played by scoring an average of 37.5 a game. Their defense only gave up an average of 5 per game and recorded 4 shutouts.

The ’52 team possessed a potent offense which racked up 337 points over the course of the season. They scored 30 or more points in 6 of the 9 games they played.

Their defense was just as dominating as they only surrendered 45 points the entire year. “The Thundering Herd” recorded their 4 shutouts against Piqua Catholic, West Milton, Versailles and Brookville. Their closest margin of victory was a 13-0 victory over Versailles.

The Buccs started off the season with a 58-6 thrashing of Maria Stein St. Johns and followed that up with their first shutout against Piqua Catholic, 32-0.

In their third game of the year, Minster was able to hold the Buccs under 30 points but still came away on the short end of a 26-6 score.

Ansonia then racked up 13 points on Covington, but still fell by the score of 45-13.

The perfect season became a reality in the season finale with a 19-0 victory over Brookville.

There are other teams in Buccaneer history that lay claim to a perfect season but the 1952 Buccaneers will always be the first.

The 1952 squad also had two players earn All-Ohio honors for their outstanding performances on the field. Dick Via, a Stalwart Lineman for the Buccaneers was named by the United Press as Left Tackle on the All-Ohio Class B first team. Bob Johnston, Offensive Guard, Linebacker and Defensive Signal Caller for “The Thundering Herd” was also named by the United Press to the All-Ohio Class B first team.