A young Covington Buccaneers team finished the 2004 season with a 5-5 record, but a nucleus of young talent returns in 2005.

After five straight years of qualifying for the state playoffs, many people will look at the 5-5 record the Buccs tallied in 2004 and say it was not a successful season.

But, when you look at what the Buccaneers had to overcome, the season was fruitful and may have set the Buccs up for the next few years.

Entering two-a-days in preparation for the 2004 season the Buccaneer coaching staff knew they were young. Only six seniors were back from the 2003 playoff team and by season’s end, only four seniors remained.

With the limited amount of experienced players, the Buccs fielded numerous underclassman at many positions on both sides of the ball.

Plus, the young Buccs had the pressure of a 43-game winning streak on their shoulders…pressure the young kids never had to face before. The Buccs never focused on the streak, but it had to be in the back of their minds entering the season because every time they read the papers, the streak came up.

“We really don’t focus on the streak,” said Finfrock prior to the season. “It was a nice accomplishment by the kids who put that streak together, but this is a new team with many kids who were not even in high school during most of those games. As far as we are concerned, we are 0-0 now.”

More adversity arose as the season progressed. The Buccs suffered some key injuries, which only made a young team younger. None had more of an impact as the injury to sophomore running back, Gene Studebaker. Studebaker was injured midway through the season, which forced a shuffling of numerous positions.

The Buccs moved fullback, Nick Christian to halfback and inserted freshman, Dan Rindler at fullback. What transpired was an added growing process to an already inexperienced offensive unit. Plus, the familiarity the offensive line developed with the Studebaker and Christian backfield tandem in the early part of the season had to be developed with the backfield switch during the season.

Through the first five games the Buccs’ recorded a 4-1 record. The only loss the Buccs suffered was a 42-7 defeat at the hands of eventual conference champions, Anna.

The Buccs then lost four straight games to Arcanum, Mississinawa Valley, Bethel and Bradford. The four-game losing streak was the first since 1991.

Covington rebounded in the final week of the season with a 24-7 win over Tri-County North. The win was vital because it showed the team had stuck together and give the Buccs something to build on for next season.

The win over Tri-County North showed what kind of character the Buccaneers had. The fact that they came off of four straight defeats to beat a good football team on the road shows the Buccs grew up a good bit in 10 weeks. They played their best football of the season on the final week of the season…which only ads to the anticipation for next season.

“This is a great way to end the season,” said Covington coach, Kevin Finfrock after the North game. “It gives us something to build on for next season and it sends our four seniors off on a high note.”

The Buccs lose the four seniors to graduation, so many players return next year a year older and wiser.

As the Buccs look ahead to the long off-season, they’ll have the motivation they need to work harder than ever. For the first time in years, the Buccs will be the hunters and not the hunted. 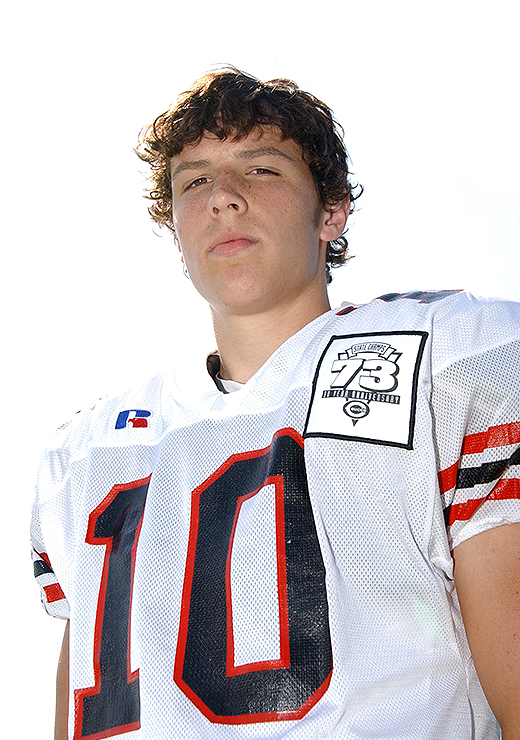 MATT FULKS PLAYED AT OHIO NORTHERN UNIVERSITY
Matt Fulks, a 2005 graduate and a senior on the 2004 football team, continued his football career at the collegiate level at Ohio Northern University where he was a kicker for the Polar Bears under coach Dean Paul. During his time at Covington, Matt broke kicking records for most field goals in a season with 6 in 2003 and the longest field goal in school history of 40 yards – which has since been broken.