The 1980 Buccs nearly reached the state finals for the second straight year, but fell short against Newark Catholic in the state semifinal.

Following the success of the 1979 team the 1980 Buccaneers had big shoes to fill. After all, last year the Buccs made it all the way to the state finals only to fall short in double overtime to Mogadore 23-17. With many of those players gone to graduation, Coach Tisdale had to fill in some huge holes in the lineup.

The Buccs were, however, able to find adequate replacements for those vacant positions and the results were outstanding. Led by running back Kevin Finfrock the ’80 team more than filled the shoes of last year’s team. They dominated the regular season, finishing (like the ’79 team) 9-0-1. They were 9-0 going into the last game of the season but settled for a 7-7 tie to Miami East.

The tie would not keep the Buccs out of the State Playoffs though. They trashed Williamsburg 27-0 to advance to the second round where they would face a powerful Newark Catholic. The Buccs dreams of making it back to the State Championship game fell short as Newark Catholic squeaked by the Buccs 14-10. 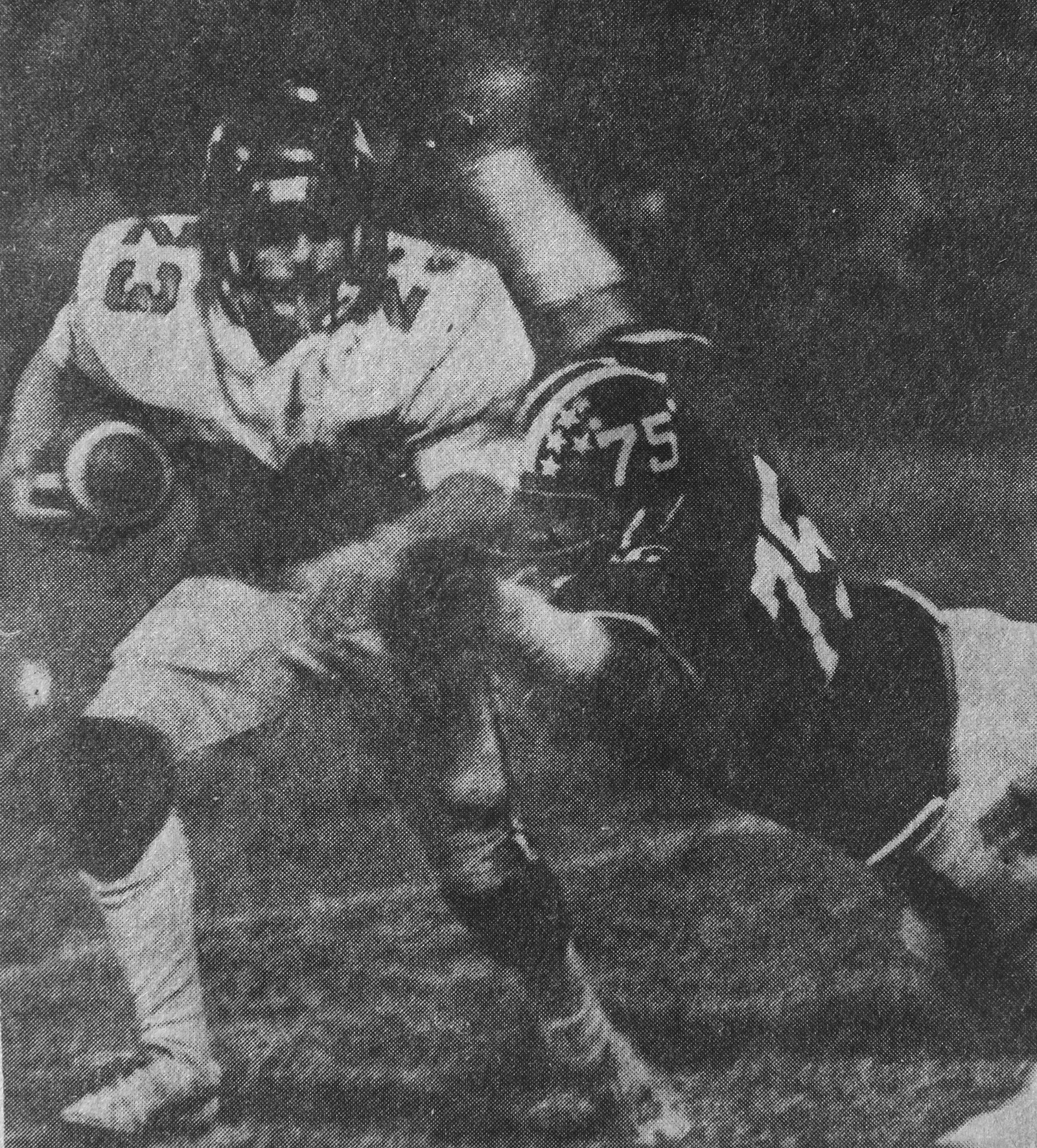 KEVIN FINFROCK PLAYS AT DEFIANCE
Kevin Finfrock wasn’t blessed with imposing size, but he overcame his deficiencies with speed and quickness. Everyone knew he was getting the ball and it never seemed to matter. Opposing defenses couldn’t find a way to stop him or the Buccs’ offense all season long. As a senior in 1980, Finfrock ran for 1298 yards, which was at the time second in school history behind only Denny Cain, who tallied 1354 rushing yards in 1971. He went on to play college football at Defiance where he was NAIA All American as a Sophomore, Junior and Senior. He was also named Defiance College Male Athlete of the Year in 1984 and 1985. Kevin was also elected into the Covington Athletic Hall of Fame. Finfrock was the head football coach at Covington from 2003 to 2006 and compiled a 34-9 record while leading his teams to the state playoff in three out of four seasons.

Covington 14, Tipp City 7
The Buccs opened the season against a stubborn Tipp City club, but the running of Kevin Finfrock was too much as Covington won in a narrow contest.

“We will mature and become a competitive team by the end of the season,” said Buccaneer’ coach Larrie Tisdale.

Covington 18, Eaton 7
One bad half of football and one superior half propelled the Buccs to their second win of the year. Trailing 7-6 at halftime, the Covington offense kicked it in gear scoring on a 3-yard run by Phil Reck and a 57-yard pass from Scott Manson to Rick Schmidt.

Said Tisdale: “We really didn’t try to get the team super high. You can only do that one or two times a year. Even without a lot of emotion, we thought we could get the job done, and we did.”

Covington 33, Bradford 17
Rick Schmidt took a 53-yard screen pass from Scott Manson with just minutes remaining in the half in for the score, the seconds later recovered a fumble and ran 13 yards for another touchdown before the half ended as the Buccs defeated longtime rival Bradford.

The Buccaneer’ running game showed its first signs of greatness, as it racked up 310 yards on the ground.

Kevin Finfrock ran for 189 yards and Phil Reck had 82 yards on the ground.

“There was more pressure in this game than when we went to state,” said coach Larrie Tisdale. “Everyone in Covington thinks we should win. When you don’t it’s a traumatic experience for the people of Covington.”

Covington 45, Springfield Catholic Central 8
The Buccaneers opened defense of their Three Rivers Conference Championship with a convincing win over the Irish. A number of turnovers early in the game for Springfield spelled doom in the first quarter.

Don Fosnight ran the opening kickoff back 76 yards and Covington racked up 358 yards total offense, 266 on the ground and 92 on the passing of Scott Manson.

Except for Manson, the entire backfield recorded touchdowns, one on a trick play. Manson hit Rick Schmidt on a pass, then Schmidt lateraled the ball to Finfrock who ran in for the score.

“You can’t overlook anybody in the league,” said Buccaneer coach, Larrie Tisdale.

Covington 26, Lehman 6
Covington spotted the Cavaliers a touchdown on their first possession, but then settled down to win its fifth straight game of the season.

Kevin Finfrock scored on a double reverse, a fourth and goal play, at the six-yard line. Finfrock finished with a game high 103 yards rushing, which sparked the Buccs’ comeback.

Later in the game, Phil Reck scored on a 2-yard run. Rick Schmidt intercepted a pass and set up another short touchdown run by Reck and Scott Manson hit Don Fosnight on a 6-yard scoring strike to put the game out of reach.

“We only punted twice, and defensively we came back after giving up some yards on the first drive,” mentioned coach Tisdale. “We’ve moved the ball well all year and we were in a situation where we didn’t have to pass, but we’ve passed better before.”

Covington 21, Versailles 13
The Covington Buccaneers came from behind for the fourth time this year, on the strength of a 48-yard drive, and beat Versailles in a TRC thriller.

The Buccs trailed 13-7 going into the final period, but Phil Reck scored from the 2-yard line and then the Buccs got an insurance score from Rick Schmidt with less than two minutes to play.

This was the first test of the Covington strength and ability as Versailles had the Buccs on the verge of defeat.

“The fact that the boys have played in the Rubber Bowl gave us the extra incentive,” said Tisdale. “They know what’s there. The frustrating thing is you can still win and not make it to the playoffs.”

Covington 45, Graham 0
The Buccs offense got rolling and their defense got its first shutout of the year, as Covington easily beat the Falcons for its seventh straight win.

Head coach Larrie Tisdale had worried about this game all week, fearing his team would overlook Graham after the big win over Versailles the previous week.

But numerous Falcon errors, three interceptions and two fumbles, put the coach to rest early. Covington built up a 29-0 lead at halftime on the strength of three scores by Phil Reck and one by Scott Manson.

Said Tisdale: “The game was not what I expected. I was worried about this game. I was impressed with the way Graham played against Versailles.”

Covington 28, Ansonia 0
Kevin Finfrock ran for 179 yards and scored two touchdowns to lead the Buccs to their eighth straight win and their second straight shutout.

In a hard-hitting game, the Buccs ran for 285 yards and passed for 67 more. The defense held the Tigers to just 102 yards of total offense.

The Covington faithful got a scare in this one when Rick Schmidt was taken from the field with an apparent broken arm. X-rays later showed Rick’s arm was just badly bruised.

“We didn’t play outstanding football, but we played well enough to win,” said Tisdale. “They hit us as hard as anyone this year.”

Covington 40, Indian Lake 8
In a rare Saturday night game, delayed because of bad weather, the Buccs won their ninth game in succession, preserving their unbeaten streak.

Phil Reck scored three touchdowns, Kevin Finfrock scored two and Rick Schmidt scored one in the Covington rout. The win assured the Buccs another berth in the State Playoffs, their second in as many years.

Said Tisdale before the game, “We are not looking by anyone. We can’t afford to let Indian Lake score on us first,”

Indian Lake’s only score came in the fourth quarter when the outcome was decided.

Up until Manson’s heroics, the Viking defense had their way with the Covington offense. It was the Buccs’ toughest game, as they could manage only three first downs against the Viking defense, prior to the final drive.

Said Tisdale, “I’ve only had three ties in my coaching career, but it all depends on how you tie. With this tie, I think we won.”

Covington 27, Williamsburg 0 (State Playoffs)
The Covington Buccaneers began their journey to get back to the state title game with an impressive performance over Williamsburg in the first round of the state playoffs.

Kevin Finfrock got the Buccs started in the first quarter with a 6-yard touchdown run. Phil Reck erupted in the second quarter with two touchdowns, one from 3-yards out and the other from the 2-yard line. The Buccs went into halftime with a 21-0 lead.

Reck put the game away in the third with his third touchdown of the game. His final touchdown came in the third quarter from 1-yard out and gave the Buccs a 27-0 shutout over the Wildcats.

Covington advances to play Newark Catholic in the second round of the playoffs.

Early on it appeared as through the Buccs were well on their way as Kevin Finfrock broke loose from 11 yards out to give Covington a 7-0 lead in the second quarter. Newark tied the score on an 80-yard run by Rob Litzinger as the two teams went into halftime deadlocked at 7-7.

The Buccs jumped ahead for the second time thanks to a 26-yard field goal from Dan Cain. Heading into the final period, the Buccs head a 10-7 lead.

Newarks’ Rob Litzinger would strike again in the fourth. Litzinger scored from 2-yards out to give the Irish a 14-10 win and end the Buccs’ season.

Covington finished the season at 10-1-1 while Newark catholic would advance to the State Championship game where they would eventually loose to Tiffin Calvert 20-0.