The Covington Buccaneers saw a streak of 12 straight state playoff appearances come to an end as it finished the season with a 5-5 record.

Coming into the 2017 season the Covington Buccaneers were fully aware that they would be facing the toughest regular season schedule since the old SRC (Southwest Rivers Conference) days in the 1980s.

Still, expectations were very high considering the Buccaneers fielded a talented – yet youthful – roster and had several players returning with a significant amount of varsity experience – primarily in the senior class. Ethan Herron and Bowen Swank entered the season as three-year letter winners, while Joey Schmelzer and Zach Parrett had two variety letters under their belts entering their senior years.

Plus, juniors Eli Gerling, Parker Dysinger and Ian Wilson, along with sophomores Jesse Fisher and Teague Deaton saw significant varsity time a year ago on an 11-1 playoff team.

Yes, anticipation was high when the team came together in August after a very successful off-season program.

“We’re excited,” said Covington coach Tyler Cates at the time. “I like where we are right now as a team and I’m anxious to see how the kids progress throughout the year. It’s going to be exciting to watch.”

Excitement quickly turned into concern as the Buccaneers dropped their first three games of the season to St. Henry, Minster and Fort Loramie – all three opponents coming off of state playoff births from the previous year.

And in each contest the Buccaneers killed themselves with mental mistakes.

“Like I told the kids, we are right there if we minimize our mistakes,” said Cates after the Minster defeat. “That’s a really good football team who will probably make a deep run in the state playoffs again and we did some nice things against them. The difference was they didn’t beat themselves and that’s why they are a good football team.”

Covington was able to rebound with back-to-back wins over Tri-County North and Arcanum and appeared to be hitting its stride heading into a week-six showdown at Miami East.

“This is a big week for us,” said Cates without hesitation in his voice prior to the Miami East game. “East is tough, very well coached and we’ll find out what we are made of against those guys. This is a big one.”

Unfortunately, mental mistakes once again cost Covington as it committed 115 yards of penalties and had four turnovers in a 34-26 loss despite out gaining Miami East 425-249.

“This is a disappointing loss because we put so much into this,” said Cates after the game. “I know we are young, but that’s not an excuse anymore. A lot of the mistakes made tonight were by the seniors. We dug ourselves a hole by making too many bonehead mistakes and couldn’t fight our way out of it.”

The defeat was devastating for Covington as it virtually ended the Buccs’ playoff hopes, while Miami East went on to win the CCC title.

And Covington couldn’t recover the next week at home against Bethel.

Once again, the Buccaneers shot themselves in the foot with penalties – 11 for 110 yards and two of those negating touchdowns. It led to a frustrating 12-7 defeat despite out gaining Bethel by 170 yards – 410 to 240.

“It’s disappointing,” said Covington coach Tyler Cates after his team dropped to 2-5 on the season. “But all you can do is move forward, stay together and keep fighting. I’ll never question the fight in Covington kids because they have a lot of fight. We’ll keep fighting and look toward next week.”

Facing the possibility of becoming the first Covington team since 1994 to end its season with a losing record, the Buccaneers played for pride in the final three games.

The Buccs returned to their winning ways with a 63-0 win over Bradford and then steamrolled Twin Valley South 56-13 in the home finale.

In the process, Covington recorded its 500th career win as a program.

“We got our five-hundredth win as a program on our home field and every kids saw the field,” said Cates after the win over the Panthers. “This was a great night to be a Bucc.”

One final hurdle was needed for a non-losing season and Covington had to overcome more than a determined National Trail team in the season finale – it had to overcome the elements.

On a cold night with a steady downpour of rain, Covington saw itself one play from coming up on the losing end as National Trail closed the gap to 7-6 with a touchdown with 18 second left in the game and it elected to go for two and the win.

Fortunately for Covington, senior Zach Parrett made a great play on the slippery turf to knock down a pass at the last second to preserve the 7-6 win and extend the Buccs’ streak to 23 seasons without a losing campaign.

“The conditions were tough and I’m proud of our kids for the way the fought to the end,” said Covington coach Tyler Cates. “Zach made a big play at the end there to preserve the win.”

In the end, the Buccaneers saw their playoff streak of 12 seasons come to an end.

“This wasn’t the season we expected,” said Cates. “We were much more talented than we showed, which is disappointing.”

Covington loses seven seniors and hope to return the remaining 42 players on the roster next season. It will also have a quality freshman class coming in.

Which hopefully leads to the beginning of another playoff streak. 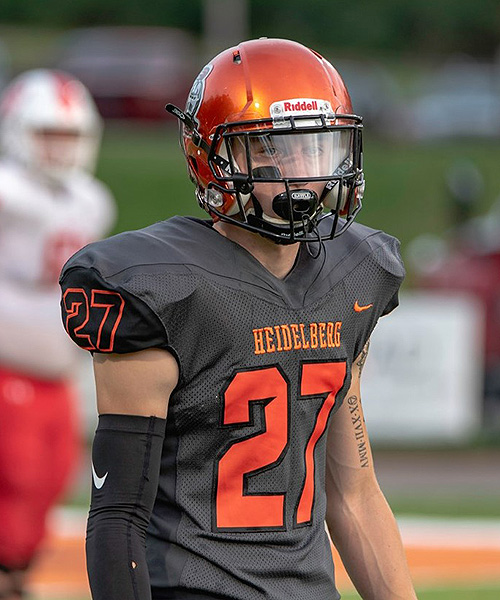 TY FREEMAN EXCELS AT HEIDELBERG UNIVERSITY
Tyler Freeman, who is the son of Jim Freeman and Jennie Feazel, was a three-year starter and letter winner for the Buccs thanks to his ability to play multiple positions – quarterback, halfback and slot back on offense; corner and safety on defense; and returning punts and kicks on special teams. Freeman, who is a 2018 graduate at Covington, went on to play college football at Heidelberg University where he started at corner from the get-go as a freshman – overcoming the odds on a team consisting of approximately 130 players. One of his teammates at Heidelberg was his former teammate at Covington, Brandon Magee, a 2016 graduate. Freeman’s success at the collegiate level was due to his values of hard work and team-first mentality, values he credits to former Buccaneer coach Dave Miller.