The 1985 Buccaneers brought back winning football to the days on the dominant teams of the ’60s and ’70s.

Coming into the 1985 season, Buccaneer fans knew the 1985 team would be something special. After all, this senior class dominated since their Little Bucc days. After four mediocre seasons which consisted of 6-3, 3-7, 6-4 and 4-5-1 seasons, the program needed a boost. Third year coach Charlie Burgbacher finally had the talent to make it happen.

Led by a kamikaze group of seniors, the Buccs won their first 8 games. They recorded shutout wins over Bradford, Tipp City, and Mechanicsburg before squeaking by Miami East 19-14. After a 42-6 win over Springfield Catholic, the Buccs suffered a minor setback to Versailles 13-3. They rebounded to close out the regular season with a 55-6 victory over Lehman to qualify for the state playoffs.

The Buccs destroyed Southeastern in the opening round of the playoffs 35-0 to set up a defensive battle with Middletown Fenwick. Played at Welcome Stadium at the University of Dayton, Covington and Middletown Fenwick wasted each other in a defensive battle for the ages. The Buccs won the battle of field position and took home a 3-0 win thanks to the kicking leg of Bill Besecker.

The win over Fenwick came at a cost as the Buccs played battered and bruised in the state semi-finals against Delphos Jefferson. The result was a 32-14 exit from the playoffs and it would be eleven years before the Buccs would get back to the tournament again.

The 1985 team set a Buccaneer record with 11 wins that would stand until the 2000 team broke the record with 12 wins. Coached by Charlie Burgbacher and led by a group of talented seniors the ’85 Buccs claimed the Region 20 Championship and took their place among the best teams in Buccaneer history.

Mr. Intensity…
Charlie Burgbacher had a stare that would intimidate the most arrogant of players. He had an aura about him that made kids believe in his teachings. The results were phenomenal in 1985.

Burgbacher was the braintrust of the 1985 team that won a school record 11 games. Coach Burgbacher walked the Covington sidelines for six seasons and although none of his other teams ever match the success of the 1985 teams, he always got the best he could out of the players he had. He just never had the talent to work with that previous Covington coaches enjoyed.

Coach Burgbacher stepped down as Buccs’ coach after the 1989 season. His career coaching record at Covington stands at 34 wins, 28 losses and 1 tie. Coach Burgbacher currently coaches football at Tipp City. 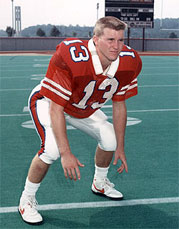 MATT POND
Matt Pond was a standout quarterback and defensive back for the Covington Buccaneers where he helped lead his team to the state semi-finals in 1985. Pond went on to play football collegiately at the United States Naval Academy and the University of Dayton after graduating from Covington High School in 1986. Eventually, Matt returned to Covington to coach varsity basketball from 2012 to 2019. 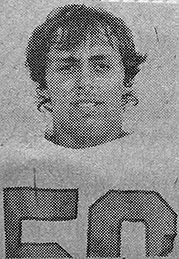 JOHN BOEHRINGER
John Boehringer was the leader of the Covington Buccaneers both emotionally and physically. At center, he spearheaded an offensive ground attack by leading the way for a backfield that ran by committee with quarterback Matt Pond, fullback Ty Owens and the running back duo of Jim Stickley and Rich Phillis. Defensively from his nose guard position, Boehringer wreaked havoc on opposing offenses with his relentless aggression and football ‘nastiness’. Boehringer played the game with intensity and enthusiasm on every snap, which made him a media darling in his playing days as evident by a story published to communicate his passion for the game. | READ THE FULL STORY |