The 2020 season was filled with obstacles outside of their control, but the Covington Buccaneer football team rallied together to put together a memorable season.

To say the year 2020 was a train wreck is an understatement. After all, Covid-19 forced the cancellation of the spring sports championships and forced all schools to close their doors for the remainder of the 2019-20 school year resulting into Covington’s graduation being held in a parking lot.

Then, the unknowns over the summer as to whether football and the fall sports season would be played left the kids in limbo as they had to find a way to get into the weight room under strict social distancing proticals.

Finally, the Buccs, who had lost 16 seniors from a year ago, were limited to one scrimmage in preparation for a season nobody knew for sure was going to materialize due to the constant threats from the health department and the government that should social distancing measures not be followed the season could be ended in a moment’s notice.

In the process, the Buccaneers lost their starting quarterback Cael Vanderhorst for the season with an ankle injury – a young man who is what you would call a “Gamer” due to his ability to rise to the occasion on the big stage as evident by his accomplishments on the wrestling mat. His intelligence and mental toughness is unmatched and was missed dearly throughout the entire season.

Yet, through it all, the kids persevered. They focused on the theme established for the season “Control what you can control”.

Junior Jenson Wagoner took over the controls at quarterback and had a whale of a season considering it was his first year of ever playing the position.

A young offensive line got better and better with each outing and the new faces in skill positions made plays at key moments in big games.

Covington concluded the season with a modest 5-5 record, but the fact that the Buccaneers were able to play 10 games against what was arguably the toughest schedule the program had faced since the 1980s is an accomplishment in itself.

Covington opened the season with three straight wins, beating Bethel 28-12, Miami East 43-14 and Twin Valley South 40-7. And they did it with a solid run defense that held the Bees to negative 35 yards and South to negative 23 yards until an 80-yard run by the Panthers against the junior varsity kids with under one minute left in the game.

Against Miami East, which was arguably Covington’s most complete game of the season, the Buccaneer defense was exceptional – holding Miami East to just 14 points – points that came on two long runs by the Vikings. Outside of those two plays, one going for 53 yards and the other for 37 yards, Covington limited Miami East to just 77 yards of offense.

In week four Covington faced its biggest test of the season on Thursday Night Lights against Fort Loramie, who had a boat load of talented players returning from a team who narrowly lost to the state champions a year ago.

Covington scored on its first possession of the game on a short run by Duncan Cooper, but from then on it was all Fort Loramie as the Redskins handed the Buccs a 41-7 defeat. Injuries ultimately derailed Loramie later in the season, but at the time the Buccaneers played one of the premier small school teams in the state.

The Buccaneers rebounded the following week with its lone shutout victory of the season, 26-0 over Tri-County North. Again, it was the defense that was the difference as it made a slim 6-0 lead hold up heading into the fourth quarter. That’s when the Buccaneers wore down the Panthers by scoring 20 points in the final seven minutes to improve to 4-1 on the season.

With momentum rolling for the Buccs, National Trail was slated next on the schedule in week six. Unfortunately Covid reared its ugly head as National Trail had to bow out of the contest due to quarantine issues, forcing Covington into a bye week.

And the Buccaneers couldn’t regain its momentum the following week as Ansonia came to town and stunned Covington 10-0. Penalties (11 for 75 yards) were Covington’s downfall as they negated several big plays and scoring opportunities.

Still, Covington entered the playoffs with a 4-2 record and the fifth seed in Regional 24 against Arcanum, who was also 4-2.

Shockingly, Arcanum built a 24-7 lead until a 40-yard run by Deacon Shields cut the margin to 24-14 to start the fourth quarter.

The defense, who limited the Trojans to negative 35 yards rushing on the night, held a potent Arcanum passing attack in check, but the Buccaneers still trailed by 10 points with just over three minutes left in the game.

The momentum swung quickly in Covington’s favor as Jensen Wagoner found Deacon Shields on a perfect 28-yard hookup to close the gap to 24-22 after Shields ran in the two-point conversion with 3:06 left to play.

A perfect onside kick by David Robinson was recovered by Connor Sindelir to keep hope alive and the Buccaneers followed with a pass from Wagoner to Jakob Hamilton to set the Buccs up at the 11. Trentin Alexander then scored on a 10-yard run and a two-point conversion run by Duncan Cooper finished off the miraculous 30-24 comeback win.

Covington was eliminated from the state playoff the following week at West Jefferson 55-20, but were able to schedule two more regular season games against the defending state champion Anna Rockets and traditional MAC power Minster.

The Buccaneers came up just short in both outings, losing 21-13 to Anna and 16-14 to Minster, but the experience proves vital for next season as Covington embarks on participating a new league – the Three Rivers Conference. 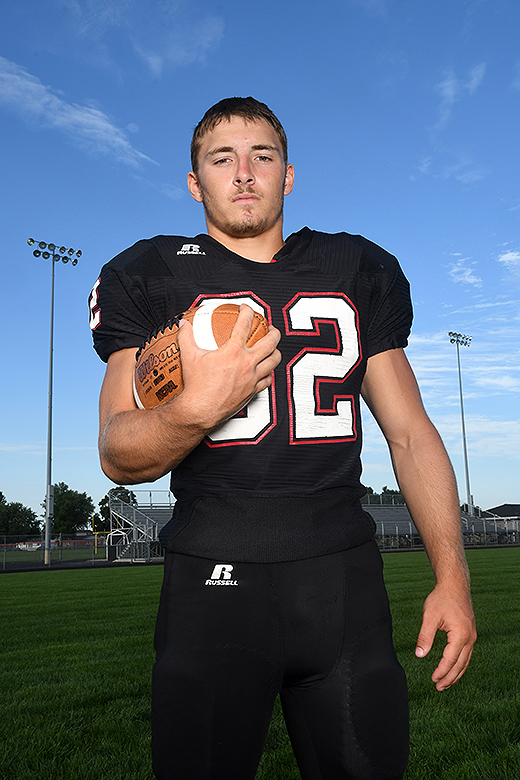 TRENTIN ALEXANDER
Trentin was a three-year starter for for the Buccaneers where he tallied 3400 yards on 318 carries and score 21 touchdowns in his career at Covington. Trentin was also a state qualifier in wrestling and played baseball for three years and track for one season. After graduation, Trentin continued his football career at Wilmington College where he plays running back for the Quakers.