The present day football movement was started in 1946 and can be credited to no one individual. The question of why Covington didn’t play football arose quite frequently until Prof. J.L. Baker called a meeting of some of the more enthusiastic sportman of the village to determine if and how the sport could be promoted. This group, Keith Langston, Merrit Burk, Russel Johnson, Howard Buchanan, Kermit Stade, Burr Simpson, Dr. Wehr and Prof. Baker, met in Burk’s Drug Store in August 1946. Deciding to “push” the sport, an open meeting of the public was called and R.C. O’Donnell was made chairman of a committee designated to solicit funds to outfit the team.

On the opening day of school in 1946, an announcement was made for all interested boys desiring to play football to meet with Burr Simpson, appointed as head football coach. His assistants were Louis Apwisch, backfield coach and Charles Watson, line coach. The first practice was held across the street from the high school building (currently Covington Middle School), the players clad in track shorts. These boys had the spirit and determination and that was about all. Some had never before witnessed a football game, so the Athletic Association sponsored their travel, as a group and via school bus, to football games of neighboring schools. After sufficient equipment was obtained, this team held several practice games and in 1947 played their first regular season schedule.

Early in 1947, the Board of Education issued enough bonds to secure $5,000, and as a gift, presented them with an additional five acres. The 10-acre site was then called Smith Field. The bonds have since been retired, being paid off at the rate of $1,000 per year.

In the meantime, a Boosters Club, composed of enthusiastic sportsmen, was organized with Russell Johnson as president. This organization raffled off an automobile and along with several other projects, secured enough money to construct and equip the football field and a quarter-mile track.

On Friday, September 12, 1947, the Covington Buccaneers traveled to Maria Stein St. John, for the first football game of the modern era and dropped a 12-0 decision, and a week later journeyed to Eaton and lost again by the same 12-0 score.

Friday, September 26, 1947, was designated as “Booster’s Night”. In the semi-darkness at Smith Field, over 1,500 eager fans heard the words, “We have honored our country with the playing of the National Anthem…now we honor the Boosters by turning on the lights. Let there be light.” R.K. Johnston, Booster president, then presented the athletic facility and Kermit Stade accepted of behalf of the school board. Covington fans were only minutes away from witnessing the rebirth of a sport that had been dormant in Covington for 37 years.

Covington hosted the Piqua Catholic Cavaliers in this first game on the friendly confines of Smith Field, and midway through the first quarter, David Beard went 30 yards around right end for the first touchdown. Dick Supinger booted the extra point as Covington put their first seven points on the scoreboard. Late in the third period, Beard and Supinger duplicated the feat in the same manner and the Buccaneers had their first triumph, a 14-0 victory that started a tradition that exists today.

One tragic incident darkened Covington football over the years. Dave Murray, a stellar performer, suffered a head injury in a practice session and passed away on September 5, 1059. Medical research determined previous injury, not directly related to football. However, the Boosters Club provided a lasting tribute to Dave Murray at the west end of Smith Field, with a new flag pole embedded in a memorial base.

Throughout the years, many exciting games have been played, and many outstanding teams have left legacies for those to follow.

The success the Buccaneers have had on the field is proven by the league titles they have captured. The titles include 2 Tri-County titles, 4 Little Buckeye titles, 3 Mad River Valley titles, 4 Three Rivers titles, 1 Southwest Rivers titles, and 10 Cross County Conference titles.

Two times Buccaneer teams were named State Champions; 1960 and 1973. The Buccs also have a state runner-up trophy thanks to the 1979 team.

As time passes and more generations pass through Covington schools, memories are made and not forgotten. Folks who have witnessed the greatness of the 1960, 1973 and 1979 teams pass along their memories to the younger generations, keeping the memories alive.

There is a bond shared by families and the community when it comes to Covington football. Most of the kids who play today have at least a parent, grandparent or uncle who played on the same field. Covington football has become a family tradition over the years.

Because of the memories and traditions, the kids of today know the players of the past. The names of the people who have made Buccaneer football what it is today. Some of the players have gone on to play at the next level and one, Tim Vogler, made it to the NFL.

There have also been some great coaches who have helped mold the Covington traditions. Blair Irvin, who coached the high powered 1960 team to a perfect 10-0 record and a State Championship. Larrie Tisdale, who may have been the greatest coach in Buccaneer history, coached two unbeaten teams, 1968 and 1973. Coach Tisdale also coached the 1979 State Runner-ups and the 1980 state playoff team. Charlie Burgbacher coached the 1985 team to a state playoff and more recently, Bob Riley coached the 1996 team to a 10-0 regular season and a playoff berth.

Coach Ted Peacock, who resigned after the 2002 season, finished with a streak of four straight playoff appearances and three straight unbeaten regular seasons. In his four seasons on the Buccaneer sidelines, Peacock had a remarkable 42-5 record.

Former Buccaneer player, Kevin Finfrock followed Peacock with a four-year record of 34-9 and led the Buccs to three playoff appearances in his tenure.

In 2016, Covington saw the dawning of a new era under Tyler Cates, who led the Buccaneers to an 11-1 record and a state playoff birth. Cates’ second season wasn’t as fruitful as the Buccaneers saw a twelve-year playoff streak end with a 5-5 season.

The one-year playoff drout ended in 2018 as the Buccaneers came back after losing the first three games of the season to run the table and finish 7-3 in the regular season. This was enough to secure a playoff birth for the 22nd time in school history and the Buccaneers finished the season with a 7-4 record after a loss in the opening round of the post season to Lima Central Catholic.

In 2019 the Buccaneers went 10-3 overall and reached the Regional Final game for the sixth time in school history and first time since 2012.

2020 saw the Buccaneers face an opponent off of the field in the Covid-19 pandemic, but were able to find a way to complete a ten-game schedule with a 5-5 record. They also competed in the state playoffs for the 24th time in school history as all teams in the state were eligible to enter the tournament. Covington earned the fifth seed in Region 24 and reached the Regional Quarterfinal round.

Coach Tyler Cates resigned after the 2020 season to accept the head coaching position at Vandalia-Butler. He left after compiling a 38-18 record with four playoff appearances in five seasons and was replaced by Austin Morgan, who was hired in April, 2021. With decreased numbers and a youthful squad, the Buccaneers finished with a 1-9 record in Morgan’s first year, but set the foundation for future success with a culture of hard work, toughness, humbleness and being unselfish. In Morgan’s second season at the helm in 2022, the Buccaneers suffered once again from minimal numbers with an historic low 21 kids on the roster – 2 seniors, 3 juniors, 9 sophomores and 7 freshmen. Covington finished the season with a 2-6 record, but showcased the work ethic and toughness Morgan established in the program. 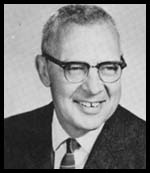 Burr Simpson…He Started It All!
He coached only 3 seasons and recorded a modest 13-10-2 record but Burr Simpson is the foundation for Buccs football. He coached the Buccs’ first team in 1947 and built the program from nothing into a 6-2 team in 1949. He set the foundation for coaches who followed him. Consider, Burr Simpson’s first season ended with a 2-6 record and in his second year he built his team into a winner by going 5-2-2. His team improved again in 1949 with a 6-2 record. With the wheels in motion, Paul Devine stepped in and recorded a 6-3 record in 1950, a 7-0-2 record in 1951 and a perfect 9-0 record in 1952.

THE VOGLER BROTHERS
Tim and Terry Vogler were arguably the most successful football players to ever come out of Covington. They were members of the 1973 State Championship team that finished the season unbeaten. Coached by Larrie Tisdale, the ’73 team only allowed two teams to score points on them in ten games and a total of 24 points all season, a record which stands today. They were also seniors on the 1974 team who finished 9-1. Both went on to play collegiately at Ohio State University under legendary coach Woody Hayes, while Tim advanced to play in the NFL for the Buffalo Bills.
| READ THEIR STORY | 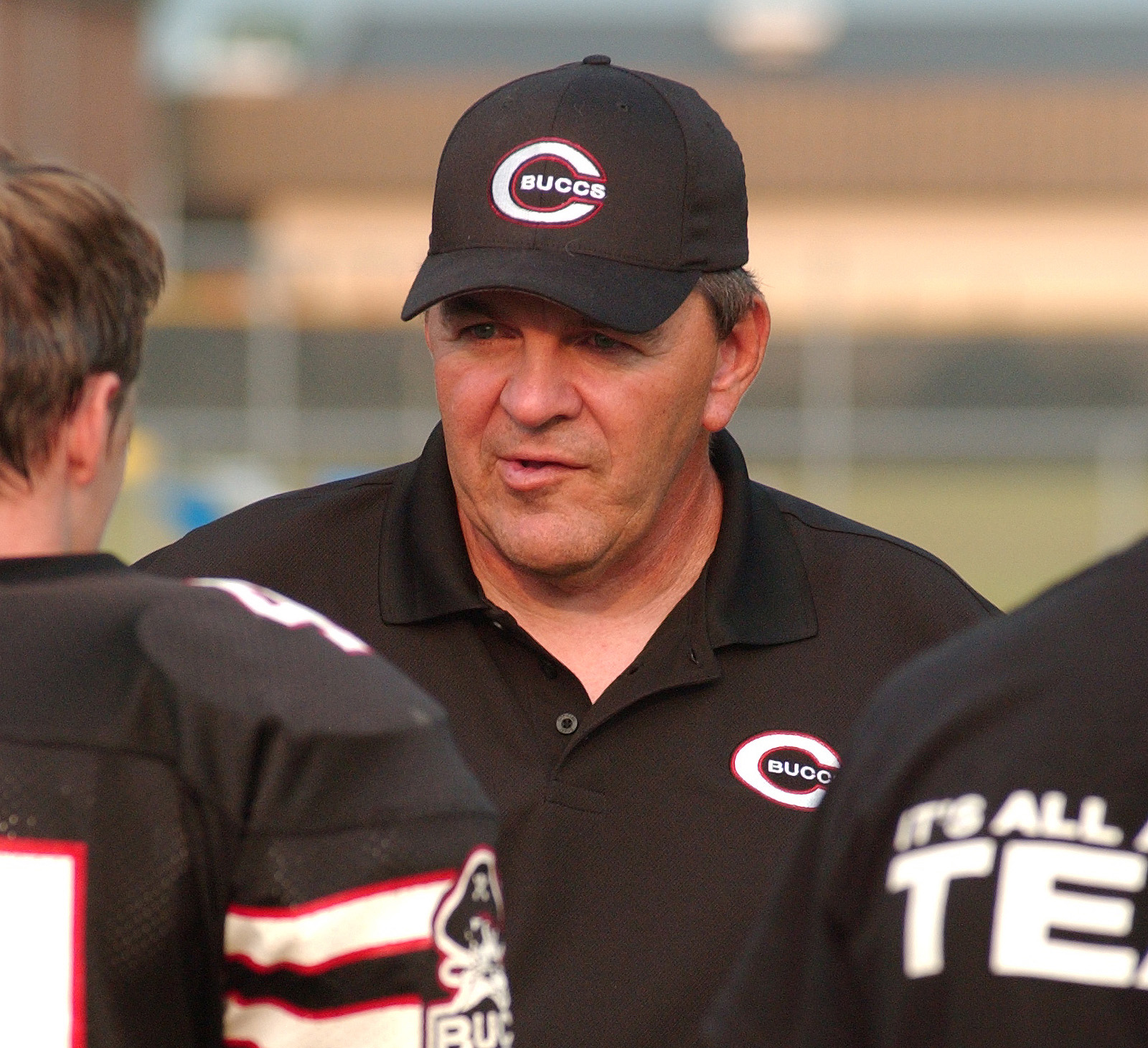 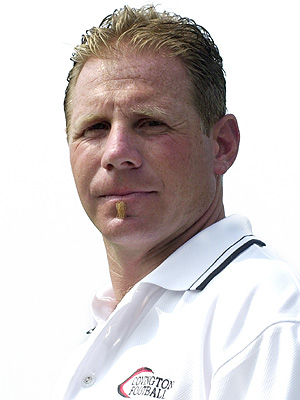 Kevin was a 1981 graduate of Covington High School and a standout athlete in football, basketball and track. He was a member of the 1979 state runner-up football team, the 1980 state semi-finalist football team, the 1981 basketball team that finished 24-1 and reached the regional final, and was a member of the 1981 state runner-up 4×100 relay team who still holds the school record in a time of 43.88. In 1980 Finfrock rushed for 1,298 yards, which at the time was the second highest single season rushing total in school history behind Denny Cain’s 1,354 yards in 1971.

Kevin was also the head football coach at Covington from 2003 to 2006 where he compiled a 34-9 record and led the Buccaneers to the state playoffs in three of his four seasons at the helm. 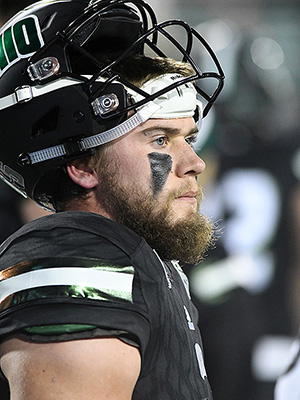 A.J. OUELLETTE
After shattering many records in high school, A.J. Ouellette went on to have a stellar career at Ohio University and ultimately became only the second athlete in Covington history to play at the professional level with stints in the NFL at New Orleans and Cleveland and then in the CFL at Toronto.
| READ ABOUT A.J. |
| RECAPS OF OUELLETTE’S CAREER |