After last years 39-1 senior class moved on with their lives, the immediate question that came up was…”could this senior class go 40-0?”.

After all, the loss of nine seniors (two who went on to play college football) seemed to be too much to overcome. Many thought this was the year the Buccs could be taken. Numerous positions were in the hands of unproven players and to top it off, a switch at the head coaching position also took place, a transition that was anything but smooth.

In early April the Covington school board turned down Finfrock in his quest to take over the Buccs’ head coaching job. The decision caused a stir in the community and among the returning football players. A few weeks later the board called an emergency meeting to revisit the issue. Thanks to the persuasion of the team and the community, the board voted 5-0 for Finfrock.

“The support I received there tonight will stay with me as long as I’m coaching at Covington,” said Finfrock at the time. “It means a lot to me to know that the kids and the parents are behind me. This is a great day for me and I owe it all to them.”

Although nobody probably thought about it at the time, that event probably set the tone for the 2003 season. Almost the entire team showed up in support of their coach and the results not only persuaded the board, but it brought the team closer together.

As the team prepared for the 2003 season it was clear this team was a close group. Although they may not have appeared to be as talented individually as in years past, they were making up for it with hard work and pushing each other to get better. Through July and August this team worked harder than in years past and the results were soon to be seen by those who doubted whether this team could become the first Buccaneer team to go 10-0 in four straight years.

After two scrimmages against Eaton and Versailles, the Buccs were primed to make their run at history. Miami East was first on the hit list and the Buccs didn’t disappoint. Matt McCord returned the opening kick-off 80 yards as the Buccs routed the Vikings 34-0. McCord also put to sleep the doubts about the running back position by gaining 127 yards and scoring 4 times.

In the minds of many people, week two was suppose to be the game where the Buccs would fall. Anna awaited after winning their first game over New Bremen. In a downpour, the Buccs racked up 304 yards of offense and received big games from McCord and Dusty Rhoades. The result was a 38-6 destruction of the Rockets and a new sense of optimism from doubters.

The next three weeks was easy going for the Buccs as they outscored Twin Valley South, National Trail and Ansonia by a combined score of 160-6. Brady Reck broke a school record with 257 yards passing against Ansonia and the Buccaneer offense was on a roll. Five games into the season the Buccs stood at 5-0 and questions about their defense were answered after only surrendering 12 points through the halfway point of the season.

Arcanum was next for the Buccs as both teams entered week six unbeaten. The winner had the inside track on the conference title and the loser fell to the rest of the pack. In a two-day affair, the Buccs dominated the Trojans for a 21-0 victory. Brady Reck threw for 256 yards and 2 touchdowns. To top it off, all doubts of whether the Buccs’ senior class could pull off the unthinkable of a 40-0 record became the thinkable.

The Buccs kept rolling through week seven and eight with big wins over Mississinawa Valley (48-8) and Bethel (48-14). McCord also continued his record-breaking season with a 286 yards and 4 touchdowns against the Bees.

Bradford came to town in week nine as the Buccs honored the 1973 state championship team. In front of the past Buccaneer greats, Brady Reck and Ross Mohler had a field day. Reck threw for 243 yards and connected with Mohler on a 52-yard scoring strike to push the Buccs within one game of their goal.

The final hurdle for a 40-0 career for the senior class came on October 24 on Covington’s Smith Field. Tri-County North came to town and with them was a 2,000-yard rusher in Eric Wright. In their most memorable game of the season, the Buccaneer defense held Wright to a season low 124 yards, while Matt McCord broke the single game rushing record with 334 yards. McCord also scored his 28th touchdown, another school record. When the dust settled from the 2003 season, the scoreboard read 40-18 in favor of the Buccs and a 40-0 regular season record for the senior class.

As the seniors from the 2003 Covington Buccaneers look back on their careers at Covington, they will always see the 40-0 record, which can never be topped, and know they did it together despite the odds. 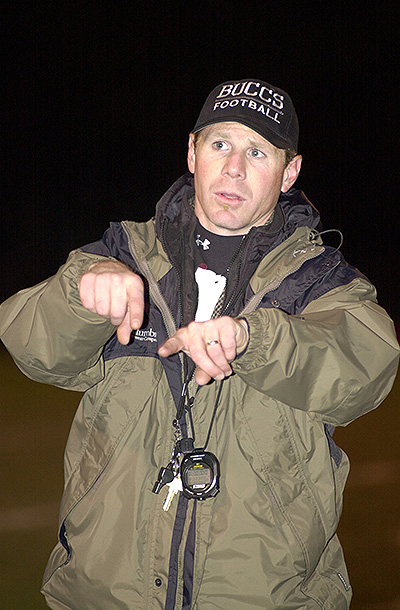 FINFROCK HIRED AS 14TH COACH IN PROGRAM HISTORY
The Covington Board of Education voted 5-0 in favor of the hiring of Kevin Finfrock as the 14th head coach in the history of the Buccaneers.

April 30, 2003 – COVINGTON
After listening for nearly 45 minutes to members of the community, parents and players, the Covington Board of Education voted 5-0 to hire Kevin Finfrock as head coach of the Covington football program. Finfrock becomes the 14th head coach in Buccaneer history and follows the incredibly successful legacy of the recently retired Ted Peacock.

BRADY RECK AND JARED HAGUE PLAY COLLEGIATELY AT OHIO DOMINICAN
Brady Reck and Jared Hague teamed to be one of the most dynamic quarterback to tight end combinations in the history of Covington football and both took their talents to Ohio Dominican University where they were a part of the first ever win in program history. In the game, Reck threw for 255 yards and two touchdown on 18 of 30 passing in a 49-33 win over Campbellsville University. Hague and Reck were seniors on the 2003 football team and were a part of a senior class that compiled a 40-0 regular season record in their careers.