Nov. 16 – LIMA SHAWNEE
The Covington Buccaneers are on a roll and what better time to play your best football than the state playoffs?

The Buccaneers taught Tiffin Calvert a lesson in textbook football with their 20-0 victory in the state semifinal. Covington now advances to Friday’s state title game against Mogadore in Akron.

“We were ready,” smiled Covington quarterback Dave Tobias. “The coaches did a great job scouting and we’ve had good practices for the past two weeks.”

Tobias had reason to smile, especially from his performance on the field. The talented quarterback accounted for 171 yards of total offense, 104 through the air on 9 of 11 passing.

After stuffing Calvert on their first possession, Covington marched 67 yards in 8 plays for the first score which came on a 5-yard pass from Tobias to Rick Schmidt. The big play of the drive came on a 39-yard catch and run by Joe Schmidt to the Seneca 24. The score was the first against the Calvert team in their past 5 games.

Again the Buccs’ defense shut the door on Calvert’s offense on their next possession. The Buccaneers took over at their own 33 and they proceeded to march down the field. Joe Schmidt put the Buccs up 12-0 as he dove over from the Calvert one.

“I was surprised it seemed so easy,” said Schmidt, who carried the ball 24 times for 113 yards. “Don’t get me wrong, we had to work hard to win, but we had them so well scouted that we knew what would work.”

Offensively, it appeared as if everything the Buccs tried worked to perfection. Tiffin Calvert’s coach Roger Kirkdale gave credit to the man engineering the Buccaneer offense.

“The difference in the game was Tobias,” said Kirkdale. “Knowing how to stop him and stopping him are two different things.”

As the Buccaneer offense clicked, the defense controlled Calvert’s running game and tailback John Kuhn. Calvert did manage to threaten late in the second, but a long pass attempt from Calvert quarterback Grant Heminger to Chuck Ritzler was knocked loose and recovered by Rick Schmidt at the Buccaneer 9-hard line.

The second half was a story of stingy defense as neither team could mount an offensive attack. Covington’s Rob Girourard, at 5-5, 120 lbs., snuck in and intercepted a Heminger pass and returned the ball to the Calvert 23. A few plays later, Tobias scampered 17 yards to seal the victory and send the Buccs to the state title game.

The story of the game can be attributed to the Buccaneers’ ability to run the ball and stop the run. Covington rushed for 213 yards while holding Tiffin to only 38 yards of their own. Another telling statistic was turnovers. Covington didn’t turn the ball over at all while forcing 2 Calvert turnovers, which led to 13 Buccaneer points.

BELOW IS A PHOTO GALLERY OF THE GAME. CLICK ON THE THUMBNAILS TO ENLARGE. 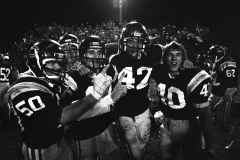 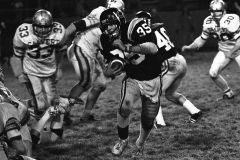 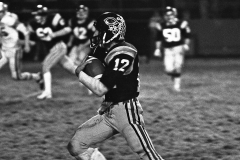 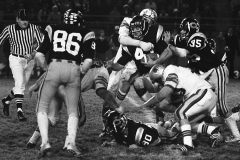 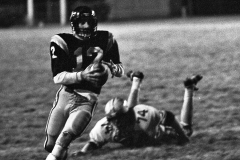 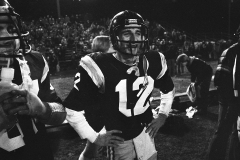 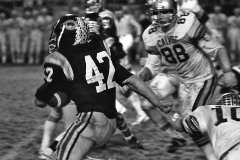 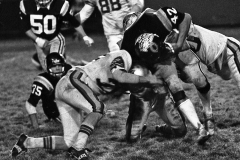 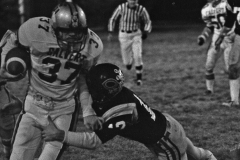 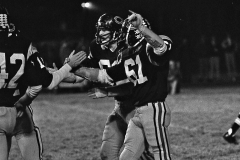 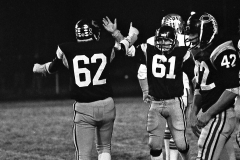 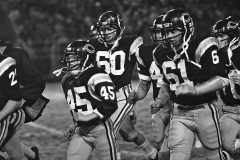 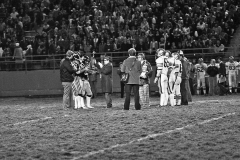 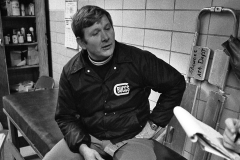